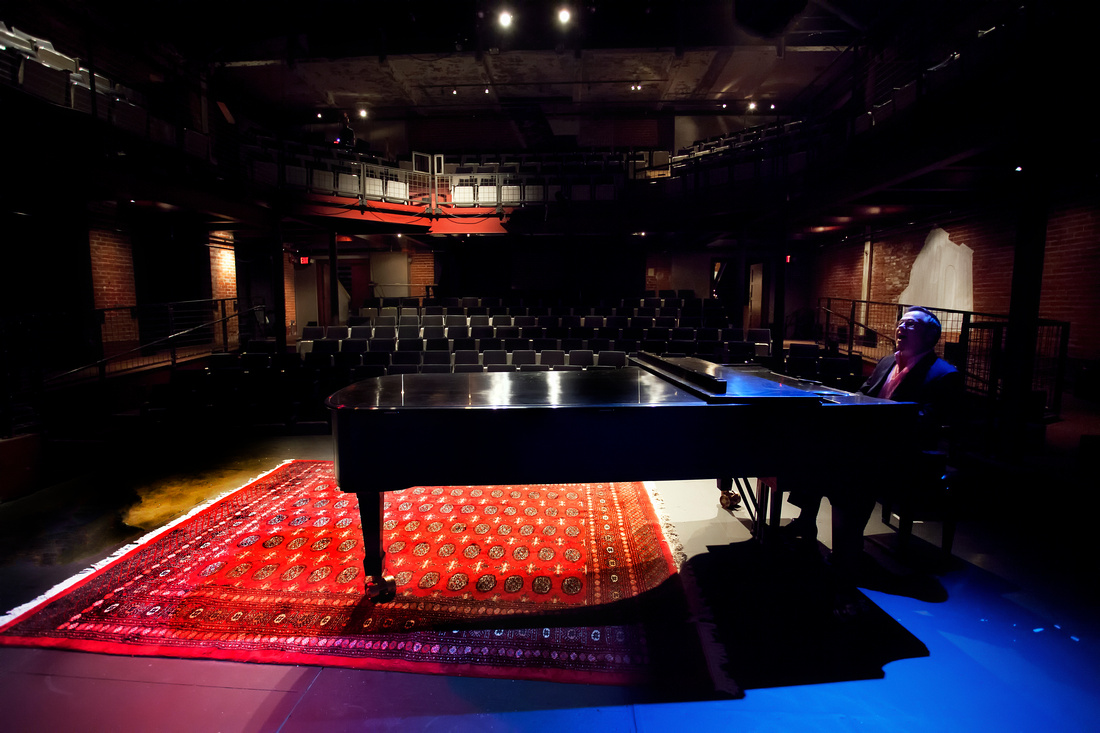 The great photographer Joe McNally once said a photographer should keep the camera ready because you may never know when a wonderful image may appear, he said that  many times he has captured his best images before or after the actual shoot. This image was after the concert, the band and audience were upstairs in the reception room drinking wine and having a good time. I am not sure why Gary walked back down to the stage but it seems that he just can’t walk by a piano. He sat down and began to play. I don’t know if he knew I was there or not. I had followed him down, (I had a feeling something magical was going to happen) and found a position at the back of the stage where I was able to capture him playing this wonderful Steinway in a great auditorium for no other reason than Gary loves and lives music. 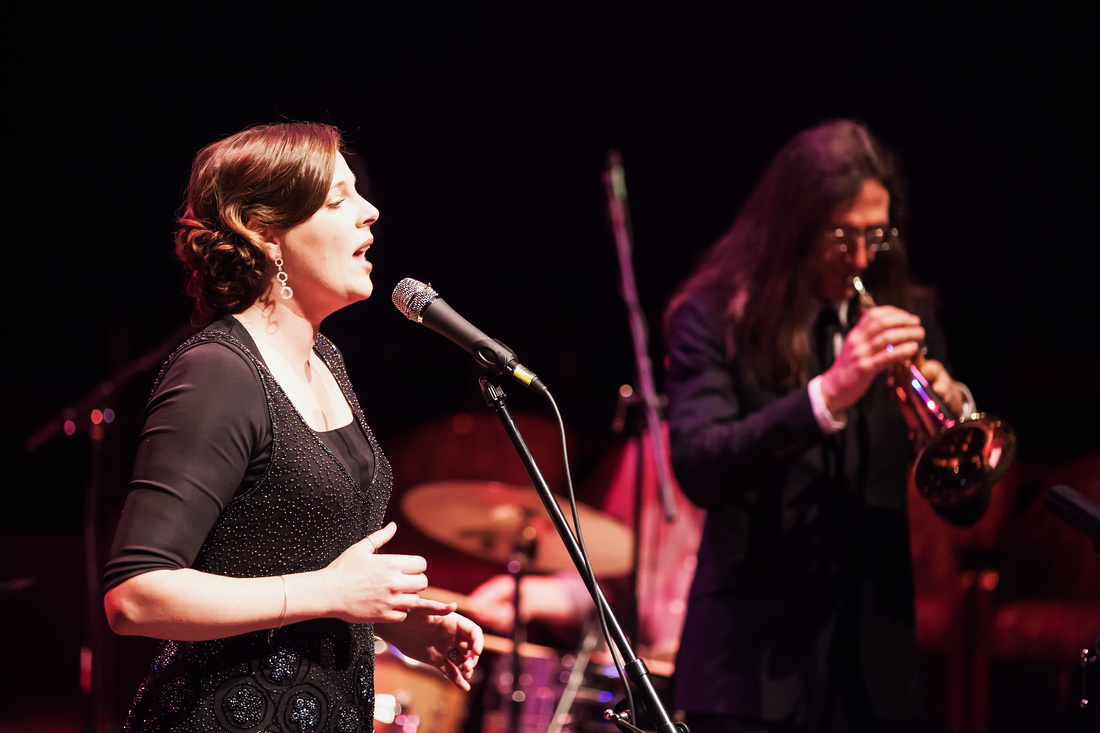 Kate Morrison is a Walla Walla favorite and they had better get out to see her every chance they get because I can’t imagine that she will not be on the international stage very soon.  I was talking to Gavin Bondy who is no stranger to international notoriety as he travels the world with the internationally popular Pink Martini. Gavin said that Kate has an amazing voice that just seems effortless and I wholeheartedly agree.  If you ever get a chance to see  Kate and the band in concert do yourself a favor and don’t miss it. Kate is just as sweet as she is talented and beautiful, Darla and I agree that it has been a real joy getting to know her and her husband Sean who by the way is a seriously good winemaker. Heck I am enjoying the fruit of his labor as I process the photos and work on this post.

Well since I was mentioning Gavin I would like to add that he is just plain amazing, he is one of the best trumpet players in the world and can improvise perfectly with anyone. He has played in the greatest music venues in the U.S. Asia and Europe and somehow he manages to remain a genuinely nice guy and a very down to earth caring person. 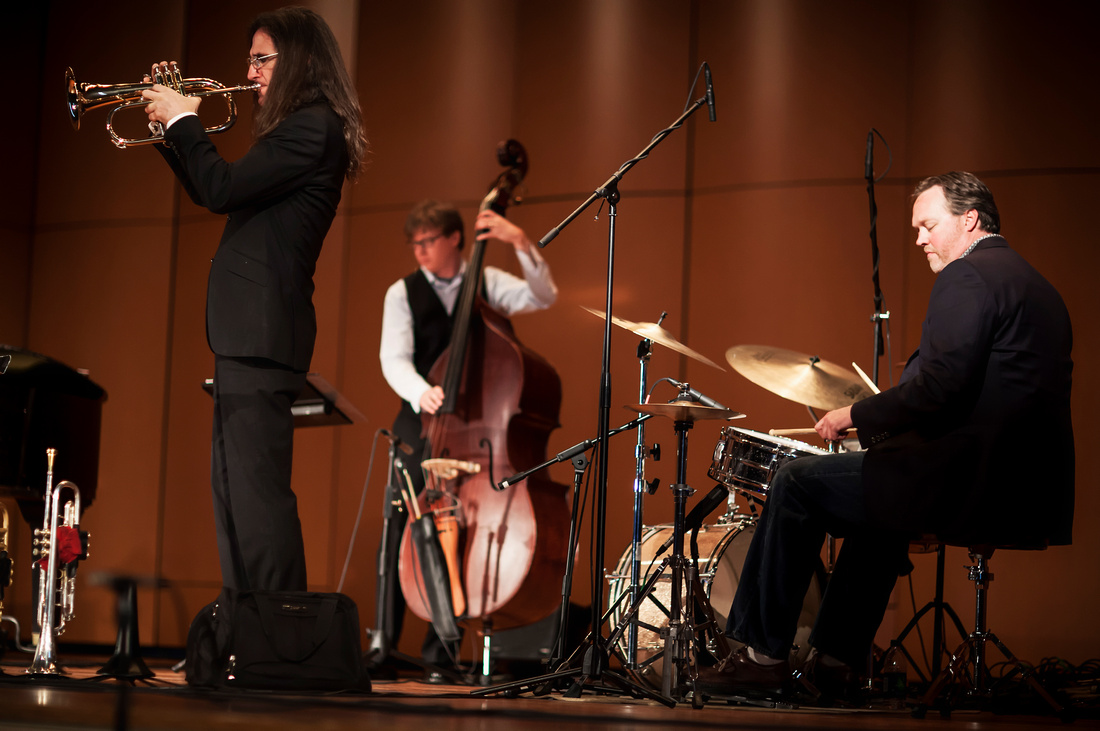 Dan Cox is a drummer and percussionist extraordinaire. In a previous blog post I mentioned the great people he has played with in the Jazz world so I won’t embarrass him again with that but I have to say that I am continually amazed by things he does.  While at the party after that concert at the Power House in Walla Walla I hear the drums down in the theater so I stepped out onto the balcony and there was Dan giving a drum lesson.  Dan is a true musician and teacher and another heck of a nice guy. 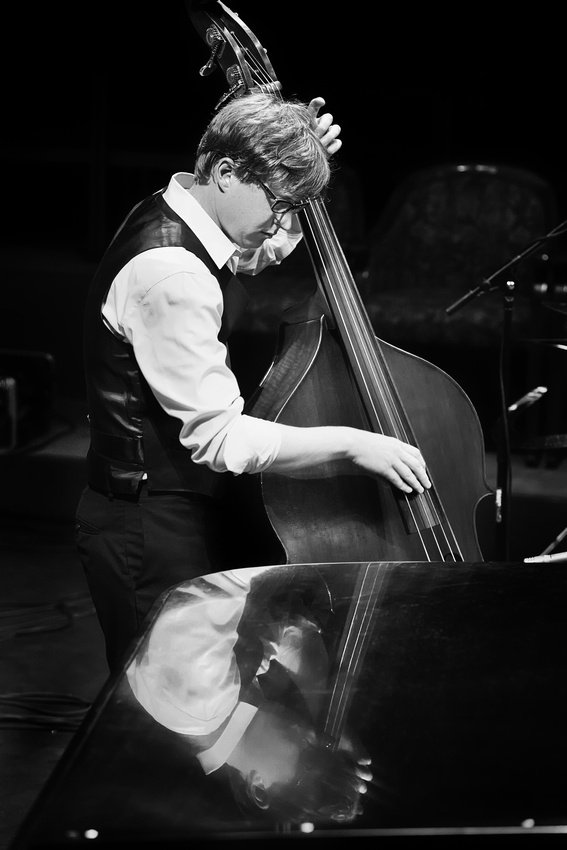 I am just getting to know Michael Simon; he is a family man who heads home right after the shows are over.  Michele is a great bass player and I love it when he gets cut loose on the upright bass, truly amazing. Michael is also a sound engineer for both concert and recording and he quietly goes about his business doing the sound for the concert. I am not sure how old Michael is but I do know it is simply amazing to find that much skill and knowledge in such a young guy. 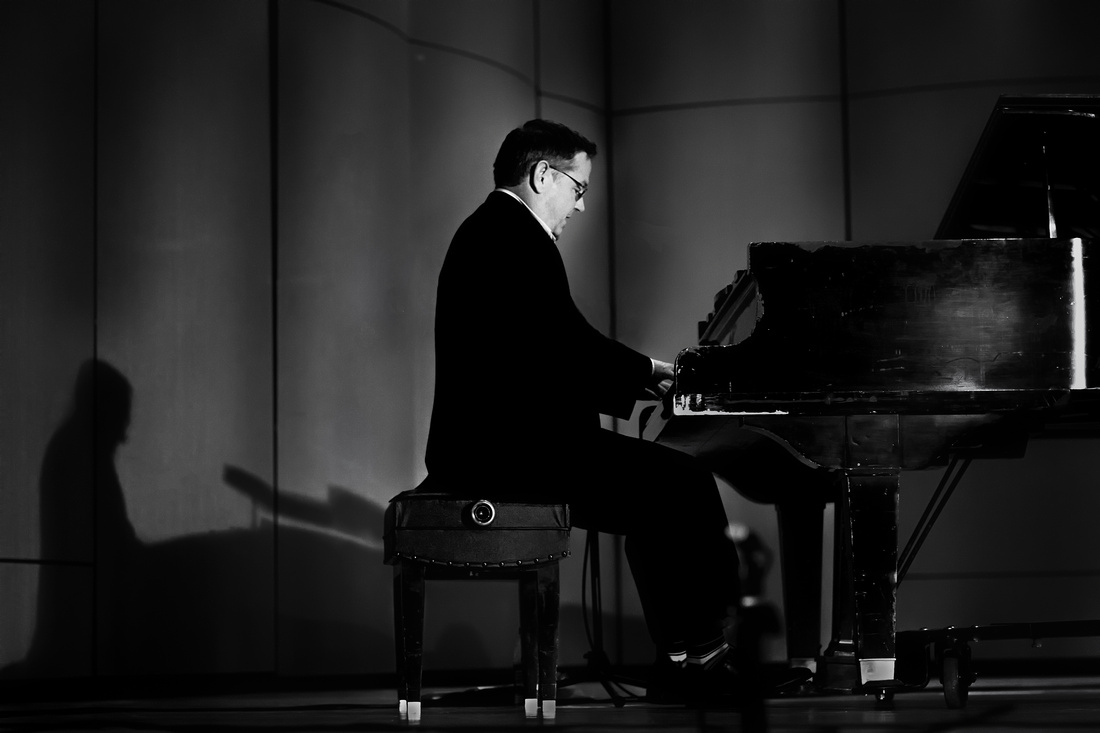 Yeah I know I mentioned Gary Hemenway in the beginning but that was more about the photography and the evening than Gary himself. I did say that for Gary it was all about the music and I am quite sure that is true.  I am so glad that Kate and Gary are playing together, musically they fit. Gary in an amazing musician and arranger and composer and they just sound right together. Kate brings her awesome talent and work ethic as well as Sean who does so much behind the scenes.  Gary brings not only his abilities which are considerable but he has played on the world stage with some of the greatest musicians alive and has the experience to take them where ever this group might go. Gary also brought Dan into the group and of course gave Gavin a call to come play with them for these concerts as well.  Kate brought Michael into the mix and that was a win for all concerned.

This is a great band and well worth the time, money, travel or what ever it takes to experience one of their concerts. I always come away feeling much better about life than when I went in. 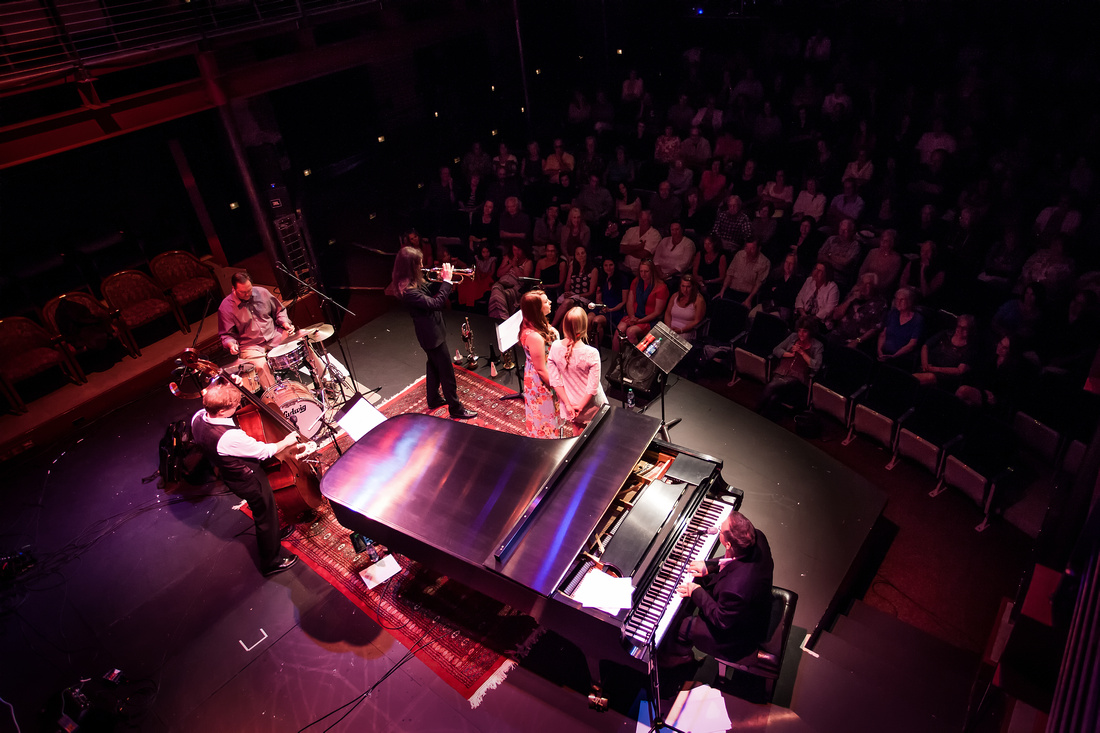 Gary had a surprise for us all, in the middle of the concert he invited two of his daughters up to sing. It was a surprise for them as well but they were magnificent. It was quite a treat for us all, the whole evening felt like a family affair. 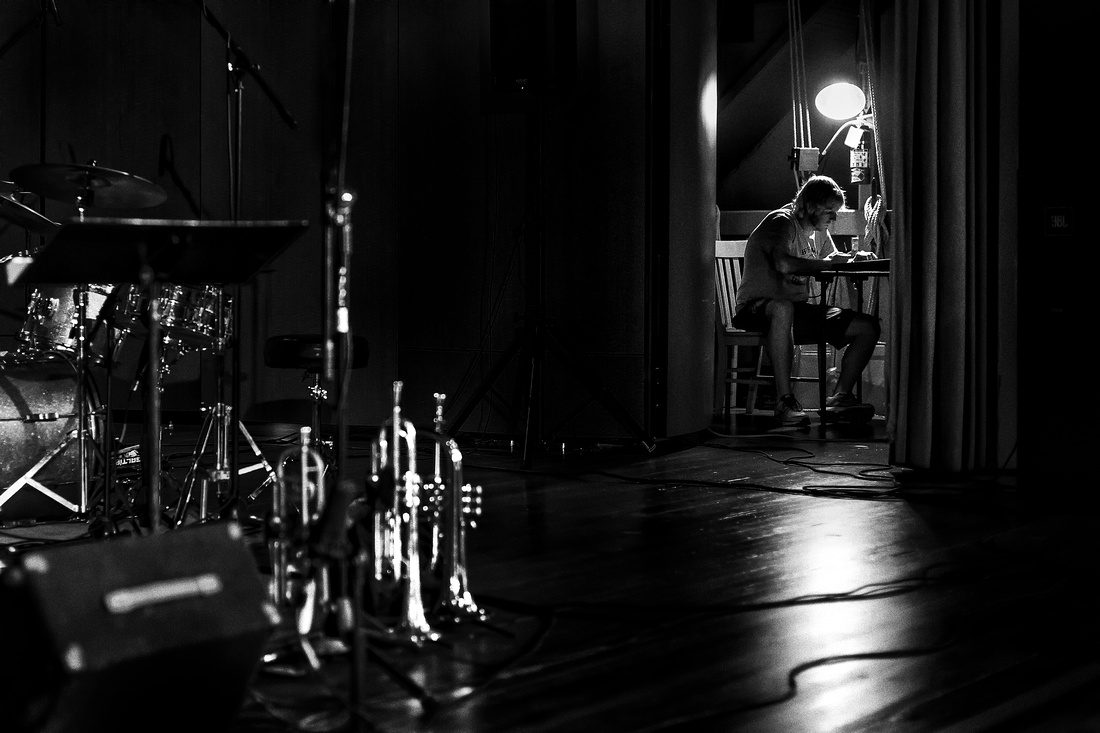 The unsung heroes of the music business are those men and women who set up, tear down, run the lights and sound concerts would be nothing without them. Brian ran the sound for both concerts and I caught him here working on the lighting as the guy who was supposed to run the lights was in the hospital. Brian and Michael just figured it all out and the show went on and was great.

I guess I just needed to add that I have known Gary and Gavin for probably thirty years and I just continue to be impressed with their abilities and humanity. While we didn’t see each other for a great many years, getting together again feels like we have just been hanging out all this time.  Life just keeps looking better all the time.