I was looking at some posts of Facebook a couple days ago. We had just received about eight inches of snow. Now for those of you who don't live in western Oregon, an inch shuts this place down pretty fast.  Anyway I was reading posts like Oh I hate it I am stuck at home with nothing to do.  I am bored there is nothing to do. Of course all the neighborhood kids were out sledding down the hills, people cross country skiing down the streets but so many were just sitting home. Some of them are photographers.  One of the major rules of outdoor photography is that bad weather makes for good photographs so when the weather gets bad, get outside and shoot.

I headed out to some of my favorite places and figured I would see how they looked covered in snow. I was very glad I did. I found some wonderful snowy scenes that had a great feeling and mood to them. Above is a drive up to a house that I have photographed a number of times before, I have shot it with rainbows setting down next to it and with wonderful clouds right after a rain, now with a beautiful blanked of white that contrasts beautifully against the trees, bushes and house.  I loved the shadows the trees made on the road as well.

Here is another shot of the same tree earlier in the year. 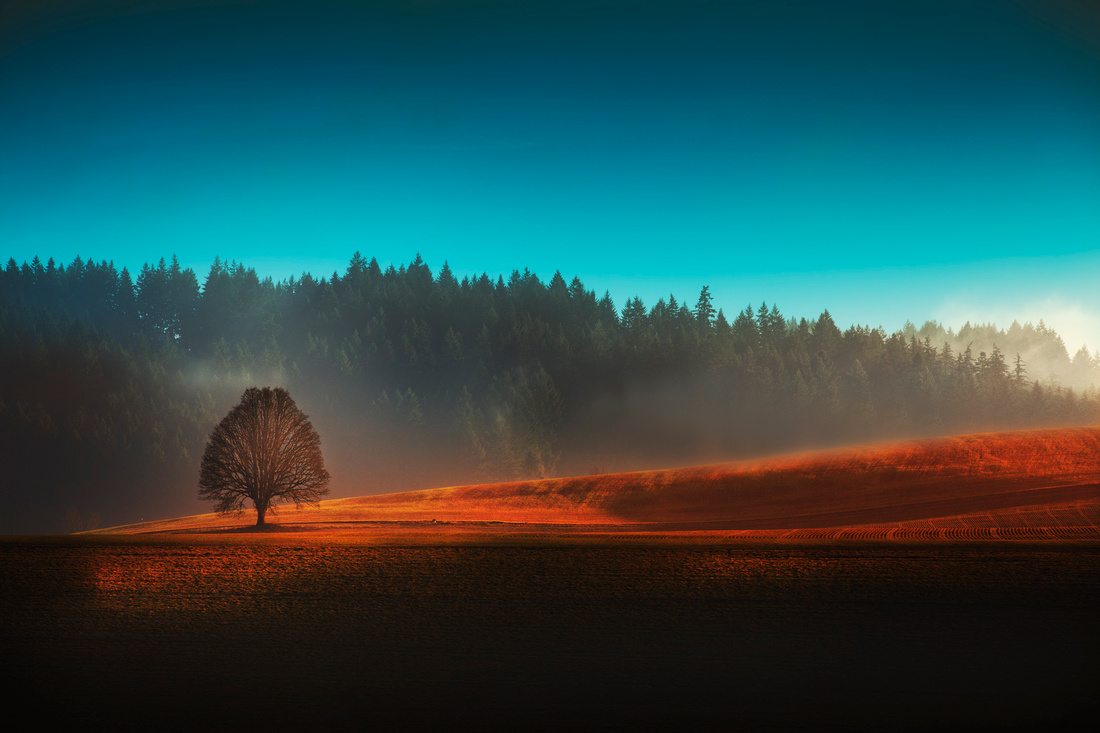 The change in the feel of the scene is remarkable. The cold of winter gives way to the warmth of summer and the colors of fall are in stark contrast to that of winter. 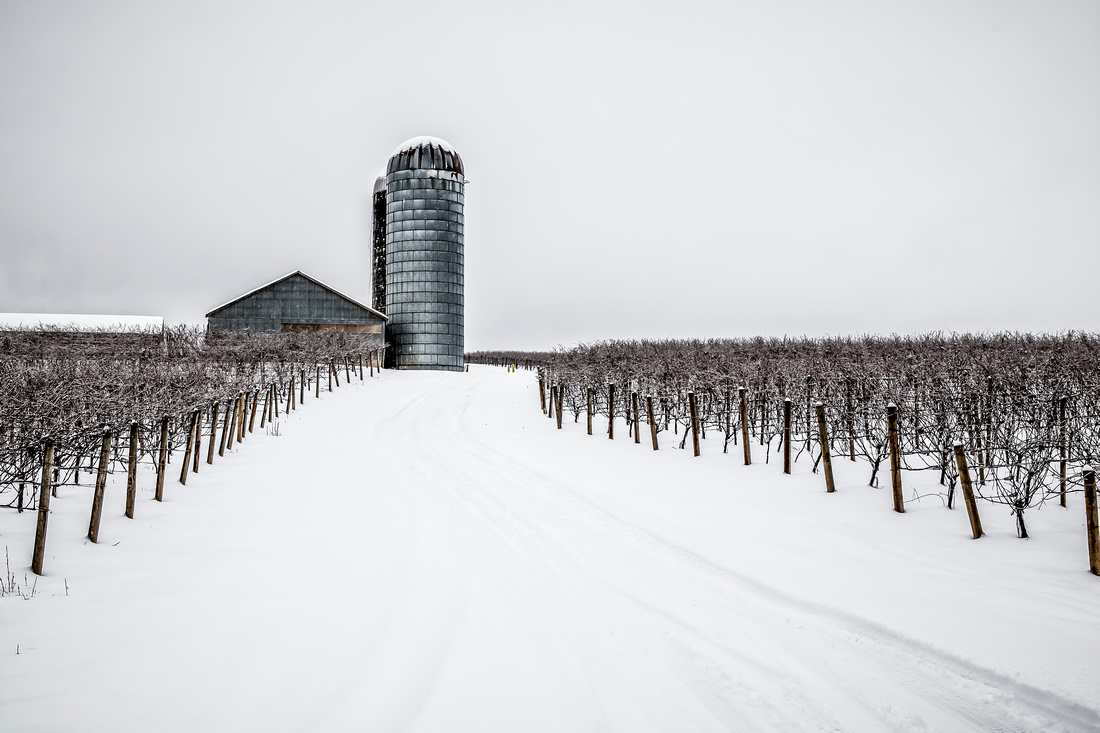 Exposure in the winter is a bit trickier all the white tends to through off the meter a bit. One thing to Remember is that the meter in your camera always meters for 18% gray so if you shoot a perfect exposure according to your camera many times you will get a blah photo instead of the image you had in your mind. Change your exposure a bit try going over exposed a bit for the snow scenes and you can try under as well. If you are shooting digital you can see your results. Back in the film days we had to be a lot more careful in our metering. Exposure is one way to get the feel that you are looking for so it is good to learn this inside out. 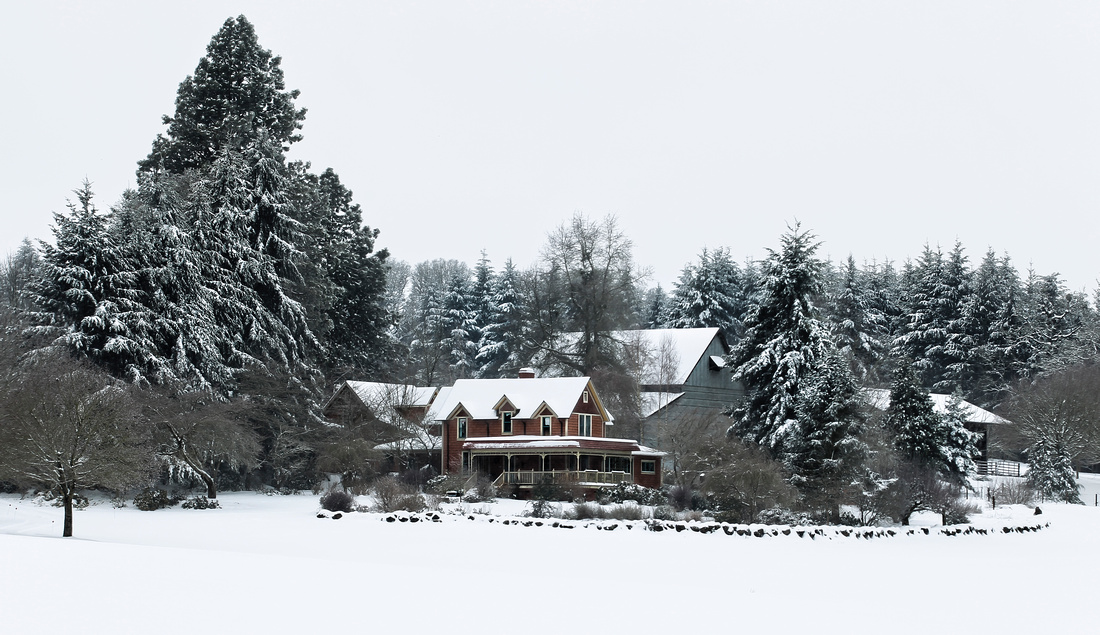 I love color shots in the winter because you really get the black and white look with a touch of color. The dark greens here play well with the white of the snow and the muted color of the house looks very good to me. I also like that there are a lot of grays in the photo like the barn.  I have driven past a few of the places in this blog post without taking a photo as I just waited for them to look their best and the soft blanket of snow did the trick.

One of the things to look for is patterns, in this case the dark of the tree trunks and branches contrasted with the snow resting on them as well as on the ground they live it. A pattern is a gold find for a photographer. 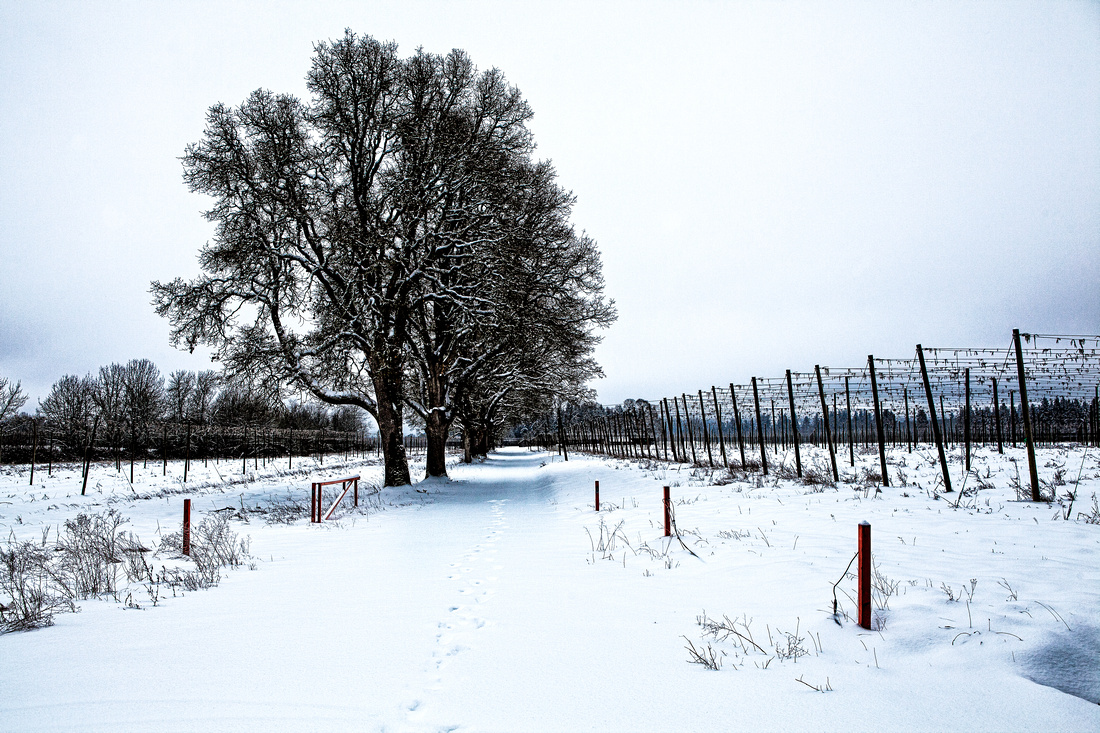 Obviously we photographers like to look for leading lines, that is a given, sometime they are blatant other times they are more subtle. Here the thing that actually caught my attention was the red posts, all the other colors were muted earth towns and the bright white of the snow so it was the red posts that really looked out of place and for me at least, added some interest to the scene.

Sometime we find a place without leading lines but we have a great way to use space to create balance and interest. The small tree on the hill gives balance to the group of larger trees at the bottom and they seen naturally holding their end of the seesaw down.  The little pond in the foreground tends to give dimension to the large area of white. If you can it also is always good to add something interesting in the foreground as well.  What I like about this scene is the balance between the upper and lower halves of the scene.  Usually I don't put the horizon line in the middle unless there is an equal interest in the sky and earth. Here I think it works well though and the blue and white seem to help each other out.

One of the things I like about using Facebook is that every so often someone contacts me with questions about photography, cameras or other equipment and I enjoy attempting to answer their questions.  Many years ago when I decided to become a pro photographer I met a very skilled photographer in Seattle named Bart Attebery.  He was a great photographer and I met him while he was photographing the tunnel boring machine I was working on at the time. I took him to lunch and worked up the guts to ask him if I could work as his assistant. He politely refused as he had tried having an assistant once and the guy kind of let him down, plus Bart said he would spend too much time teaching me, but over the years was there to answer any questions I had if I ever called. Bart was very generous with his advise and I hope to be the same way.  One thing he told me that I should have listened to was to go to school. He went to the Los Angeles Art Center School and said that going to school would take ten years off my learning curve. My guess it would be more like fifteen hahaha. Anyway if you are thinking about being a pro photographer take his advice and find a great school it really would help.  If not, well dig in.

I think that the hardest things to learn about photography are not technical but artistic. The technical is pretty easy and once you have the basics you can figure out the rest. Also it is much easier now than in the film days, then we really had to know the technical. Some people think that it is wrong that digital has made something's easier but in reality the camera is only the tool and what ever make it easier to get the art out of us is cool.