Hi folks, I am trying a daily photo blog here, we will see  how well I do hahaha anyway I will be posting photographs that I have done and maybe a bit of explanation of what went on and how I did them. 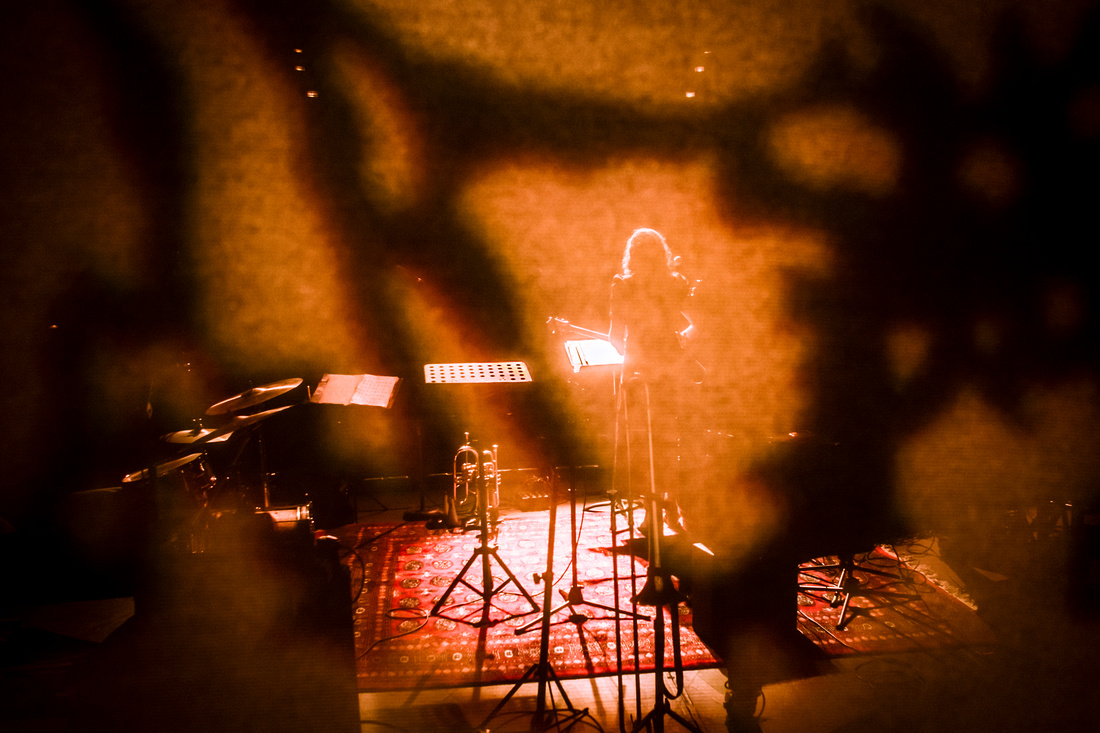 I had the honor to be booked to shoot a fabulous concert with Kate and the Crocodiles. I snagged this shot while the band was getting ready. It is taken through the backdrop and the color is from the light shining on the back drop. When I shoot concerts I am pretty much always in manual mode. There are only a few exposures one needs and I memorize them and switch between them as needed. If you learn the reciprocity table you can easily figure out what shutter speed or F stop you need as you move one or the other.  Here and in some of the following photos you will see many different colors and intensities and from that one figures out the exposure needed to get the shot desired. 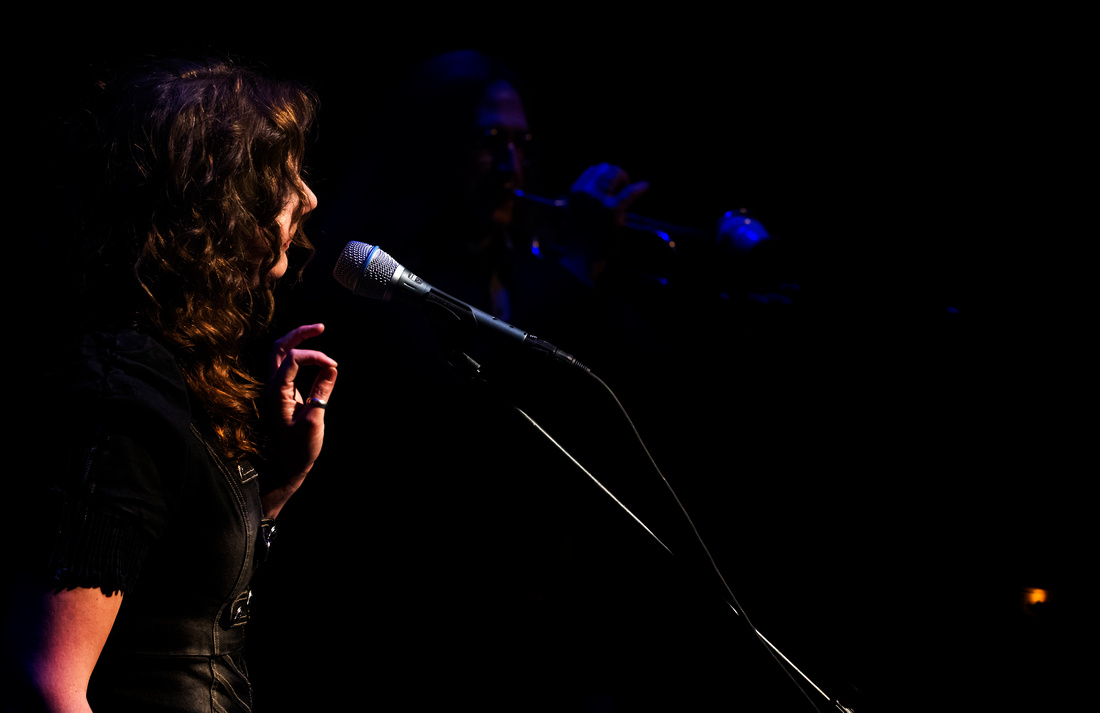 In this shot I wanted to give the viewer the feel of what I was experiencing at the time. Kate was singing a beautiful emotional song full of love and loss. Gavin was playing softly and his soulful trumpet was wafting trough the theater in an almost ethereal manner. It came to us like something not fully in the consciousness working its way in and adding depth to the experience.  The blue light was perfect and I exposed for the highlights on Kate which let Gavin fade into the back ground but like his music still a part of the reality of the experience. 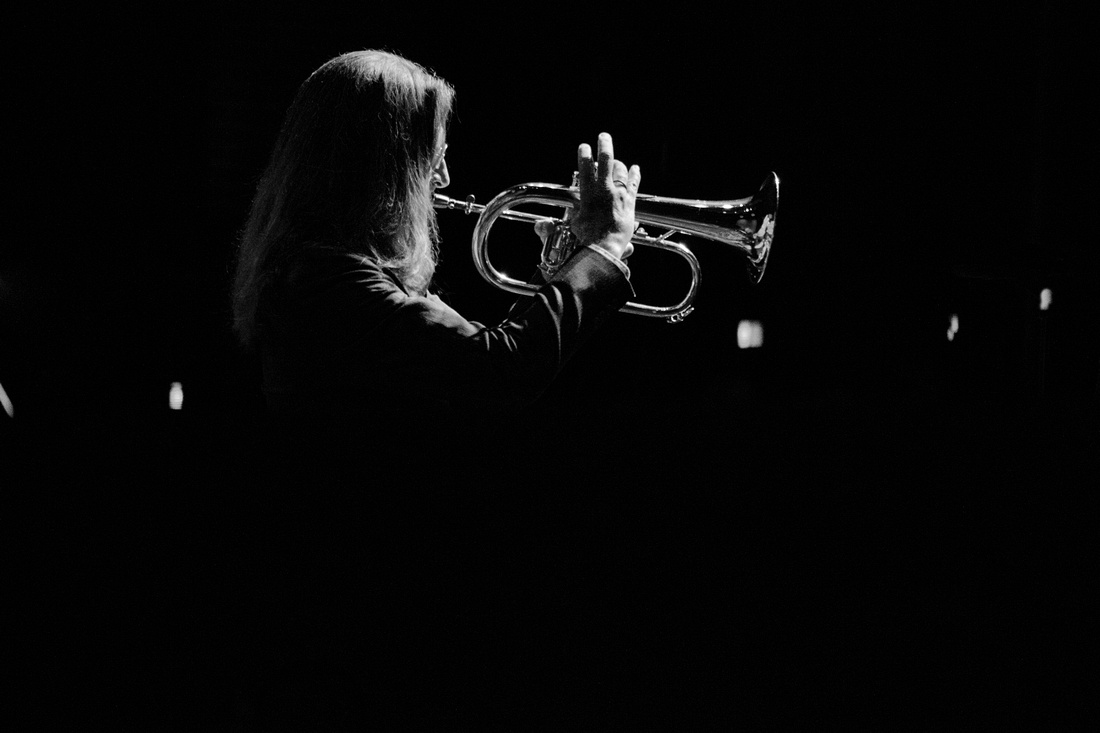 When I saw the light striking Gavin I knew I had a good shot. I was temped to move because the lid of the Steinway was between us. I decided to use it to get the black at the bottom of the photograph and run the lights across the frame.  Again in a shot like this I exposed for the highlights. This does a couple things. First it gets the look that I wanted with the highlights exposed correctly and the rest going black.

In the film days one had to know their exposures better because beyond a Polaroid you had to make the judgement on the exposure then trust it for the outcome. When I shot medium format I had a Polaroid back but that would not have worked here.

Now with digital you can chimp (look at the screen) to see what you are getting but it is still important to know your exposures and what they do as when an image like this pops up you have to get it quick and don't have time to mess around.

The second thing you get out of this is that you can lower your ISO a bit. I shot this at 5000 ISO and 1/250 @ f2.8. What I was after here was getting a sharp image. I shot this with a 70-200 zoom When using longer lenses you want to shoot a bit faster because it amplifies the shake. The rule of thumb is match your shutter speed with your focal length. If you shoot at 200 then be at least at 1/200 of a second. It is just a guideline and like all guidelines can be broken but it is a great way to remember and get in the ball park.

I do think the easiest part of photography is the mechanics. They really are not that hard to learn. The toughest if training the eye. That takes a life time unless you are one of those wonderfully gifted persons who just naturally see artistically. 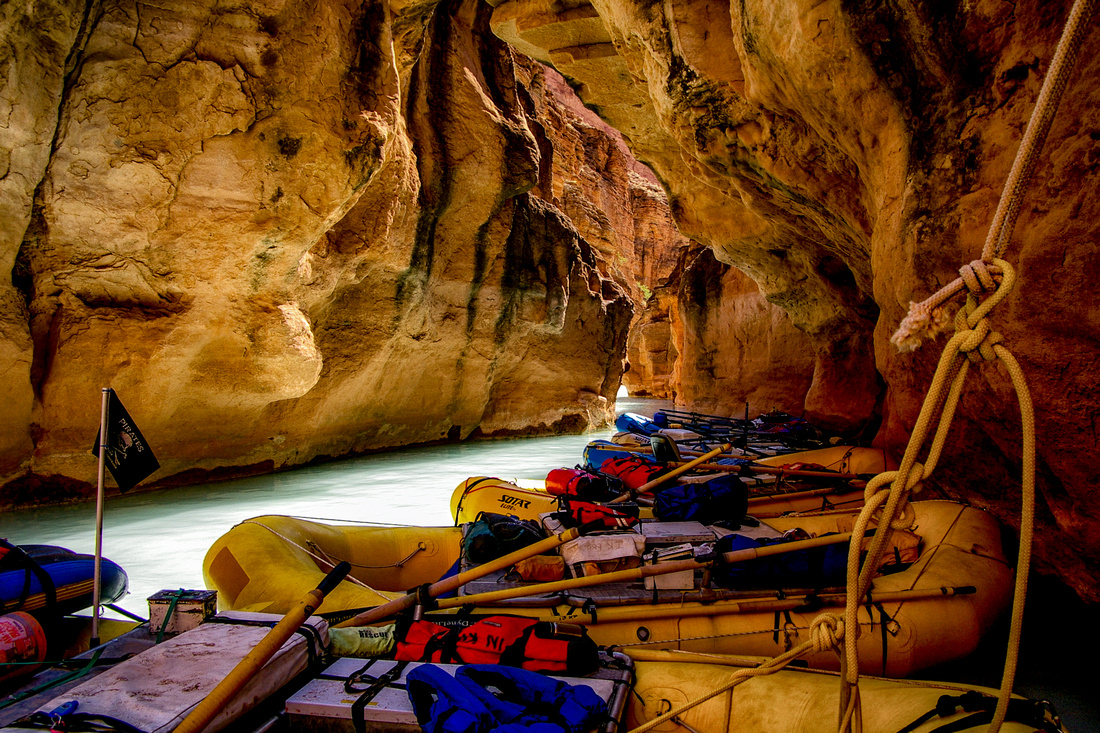 This photo was a bit harder than it looks. It is Havasu creek just at the confluence with the Colorado River in the Grand Canyon.

The problem here is that it was a very bright day and part of the photo was shot in the shade of the overhanging rock but the sun is hitting the other side and of course it is hitting directly on the water.

Part of the interest of this place is the water, that creamy light blue. I wanted to show everything but not let the river blow out the highlights.

This would have been very hard with film but a secret for digital is shooting in RAW this gives you much more latitude to draw information and detail out of the dark and light. In a good digital camera you have maybe eight stops of Dynamic Range where with film it was about three. The human eye sees around 11 stops I believe and some cameras are just now getting there.

This camera was an entry level Pentax K100D. A great camera for the money. The big thing here is not the shutter speed or F stop but the relationship with the dark and light, shooting RAW and the Pentax helped me achieve this photo and still let the viewer see the water just like it looks with that beautiful creamy light blue.

In this photo the story is told less by the mechanics that the composition. This place had a magical feel to it and I wanted to show that. It was about the rafting trip not just a scenery shot so the rafts are in a dominant position. The rope in the foreground is to let the viewer know that we were tied up there and to at a bit of interest to the image.

The use of the leading lines created by the rocks and water draw the views attention into the photograph.  If you look the area where the water disappears into the rock is a bit lighter than the foreground this also helps draw on into the photo as the eye will naturally gravitate toward the lightest portion of the photograph. This is something to remember especially when shooting portraits. 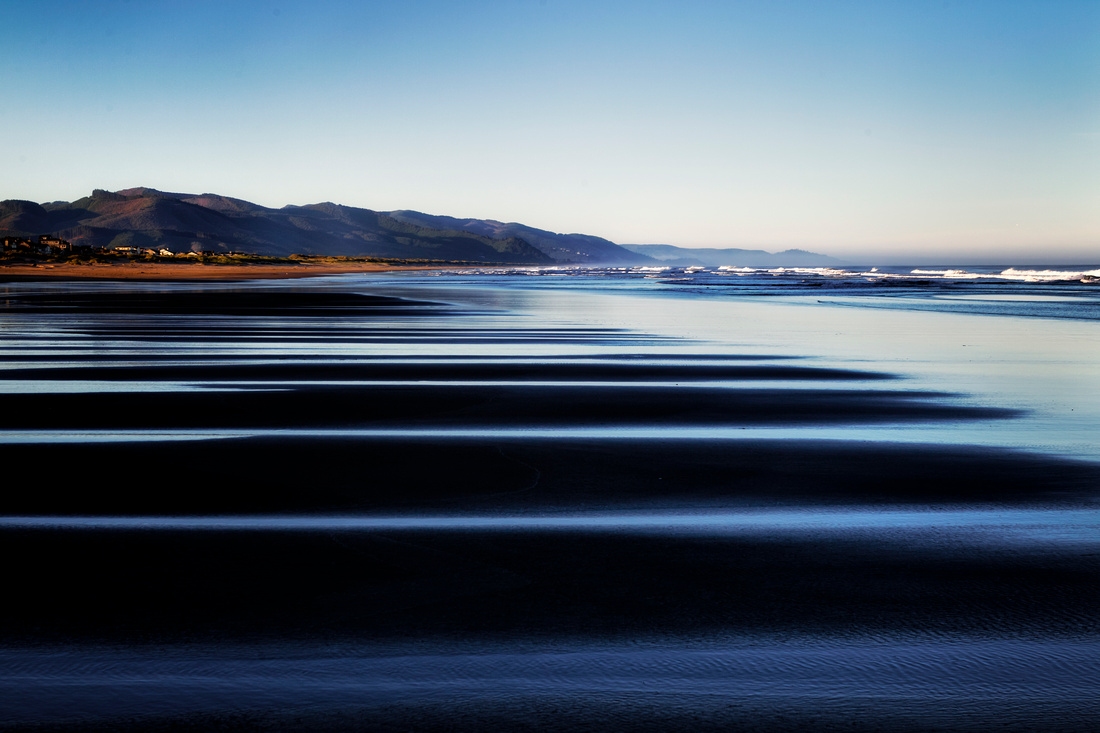 A number of things came together to make this shot. As most of the time my camera was set on AV. That lets me control the f-stop to get the depth of field I desire. This one was probably around f8 and I think the shutter speed came in around 1/160th of a second. The lens is a 24-70. I like shooting AV as it is quick and easy. Keep the ISO up enough so you can used a fast enough shutter speed to keep from blurring.  Another trick that I learned from slide film works much of the time digital as well is to underexpose between a half and 2/3 of a stop and the colors get richer. The deep blues come from the early morning light which has a lot of blue in it. The light reflecting off the water especially in the small streams here contrast with the dark sand that I let go black to get the effect I wanted. I liked the strong graphic design of the scene. 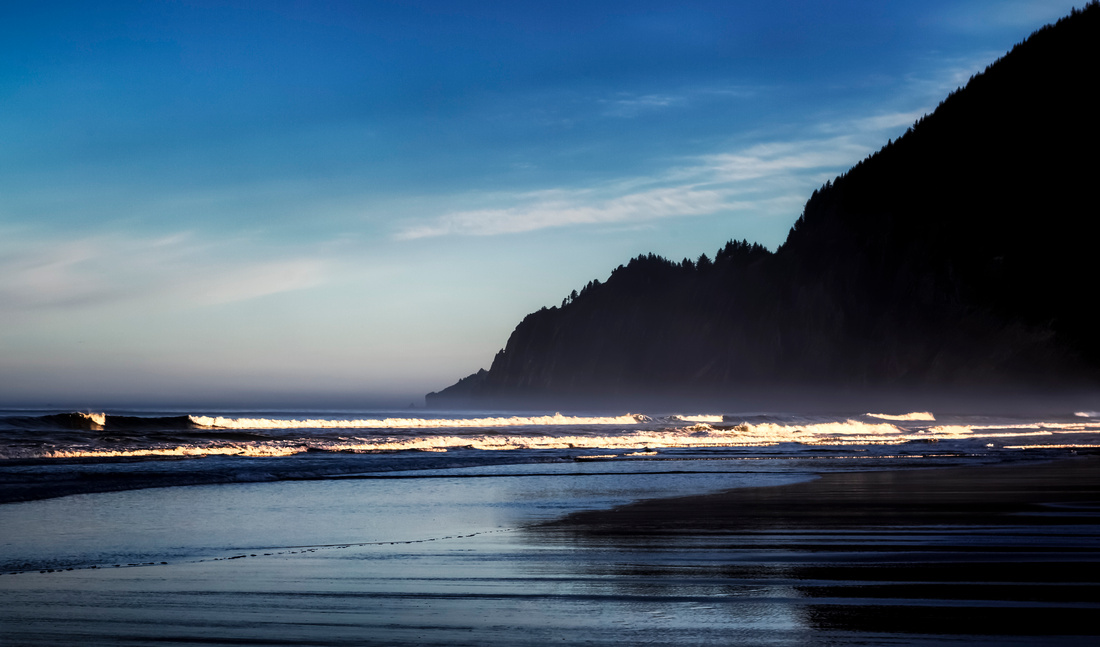 This image was shot just a few minutes earlier than the previous one. Everything was done pretty much the same but the fist light striking the waves make for a cool effect. As the sun began to peak over the hills to the right rear of the scent the first light only lit the white of the waves.

The image below actually was the first photo I took that morning. The light had of course lit the sky some but no direct light on the scene itself. I bit higher ISO and longer exposure allowed me to capture what light there was and the rest I brought out in processing. Remember shooting in RAW give you far more dynamic range to work with. Most people don't think about sunrises on the left coast but they do create some cool images. 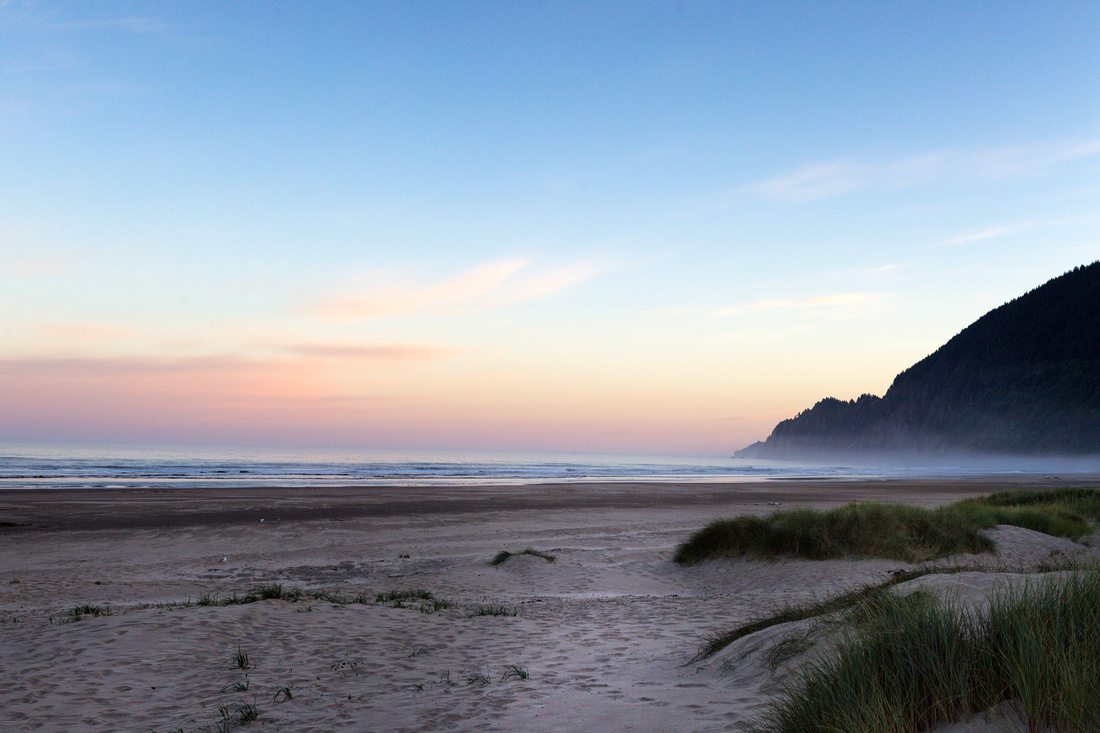