I Am A Rafter (What it has taught me about Spirituality) 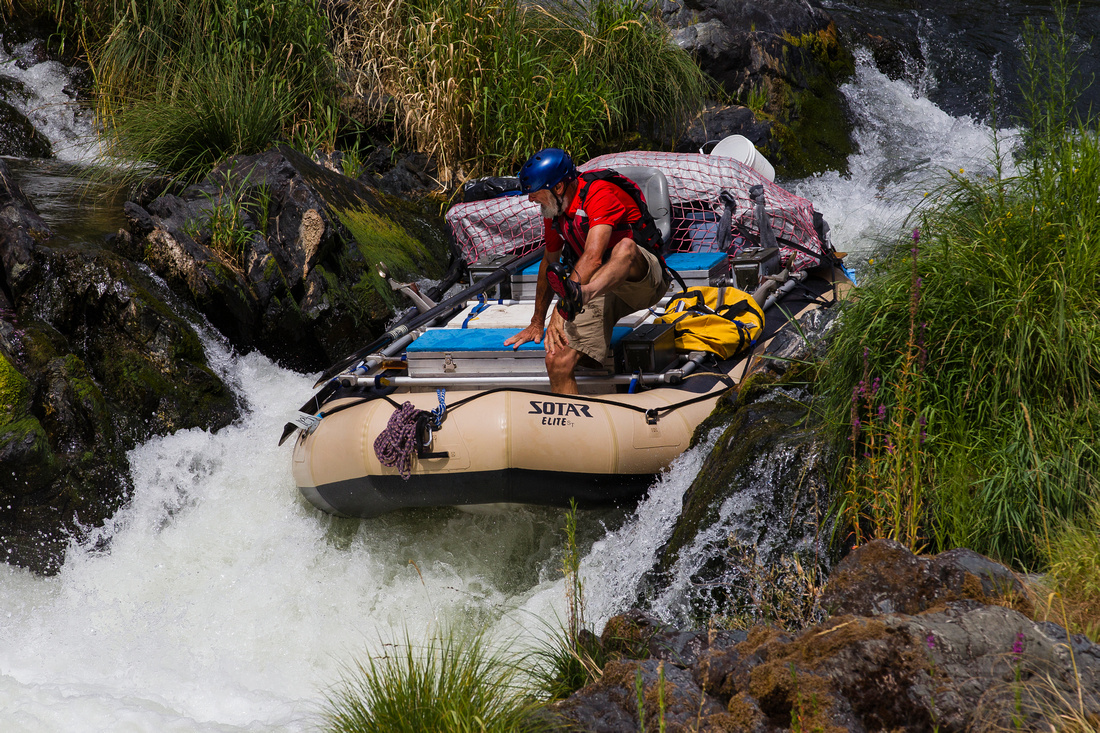 I am a rafter, whitewater, flat water, it really doesn’t matter to me any more. I just love being on the river. Chief Si'ahl says the rivers are our brothers but the White Man does not understand this. It is true but it is not beyond us to learn it. It does however, takes time.

I would love to see all the rivers running free, flowing at their pace according to the seasons. Living the lives they were meant to live. Sure I like electricity, I get dams, I grew up right in front of the Grand Coulee Dam. I worked in it, I played in the lake behind it, and I lived with the power it gives. I loved the roar of its falls and I could feel it deep within my chest.

But there is a fundamental flaw with dams, they come from our culture’s need to conquer or harness the energy within the river and thus we change it, we pollute it, and we think we have won but we haven’t. In a large sense we have lost much, and taken much away from those who for centuries, lived with the river on it’s terms.

You cannot be a rafter, spending countless hours flowing with a river and not come to understand that it is us who must adapt to the river. It carries us but it is up to us to figure it out, to learn to listen to and perceive it’s nuances not the other way around.

I have often thought what an adventure it would be if we could raft the Columbia river free of dams. From Canada to the ocean. The major rapids, on a river that flows up to 200k cfs, wow. To float by the cultures who have lived their lives along it as their ancestors did. But that will never be.

It is hard to raft for days and pass though lands that are owned. You cannot stop and walk up a hill, sit in a grassy field, pick wild berries because in so many places, the land is owned. If you think about it, parks are wonderful, but they are little bits of property set aside so we can see and experience them. They are filled with people, signs tell us to go here and not there. No dogs, not this or that and knowing people, it all makes sense, yet it is a poverty.

So we pass through the property we are not allowed to set foot upon. Chief Si'ahl said his people had no understanding of the ownership of land. How can you own the sun on your face or the wind against your body? It was foreign to him.

I wonder what it  might feel like if that were true today?I use my imagination to try and find out, to feel it if only in a small way, but I cannot.

I realize at my age, if I was living like the indigenous peoples of this land did, I would probably be dead by now, at least there would be a very good chance of it. Then I wonder if that would be so bad, would a fuller life, one connected to the earth, the air, creatures and trees have left me fulfilled in the end? Would a life that was so much more rich, with the fullness of understanding that I was part of this earth, and everything in it, not just a mental understanding, but a deep, balls to bones understanding, be better than just existing for a couple decades longer?

I don’t know but I can guess.

I think of spirituality, how it works, and how it doesn’t.  What can I learn from it? What is it really? I have ideas but I know there is something greater, even with all my years of study, prayer, meditation, listening to mentors, I still have only scratched the surface.

I wonder how my culture has influence and maybe infected my understanding of the truth found in the holy scriptures.

I have been using my imagination to try and see what it was like in king David’s time and how we tend to think of it like things are now. How big was Jerusalem as he stood on his porch looking at the stars, or gazing upon the beauty of Bathsheba. Do we unconsciously relate Israel to the US or whatever country we happen to have been born in? Was David’s Jerusalem like Washington DC?

I live in a very small town. My town covers around 2300 acres. It certainly is not what I would think of as a thriving metropolis and to tell the truth, I would not want it that way. Then I think of David’s Jerusalem, it covered 15 acres. It had a couple thousand people in it.  Nazareth, where Jesus came from, was smaller yet and held less than 200 people. The smallest town I have lived in was 400.

This would have a great effect on your outlook and understanding of spirituality. Jesus walked in the wilderness to talk to God, it wasn’t far away. We need to go miles to find a park. Or a river.

Our culture was created by a handful of people in a small insignificant little piece of land in Europe. It only came about because they managed to figure out a way to use gunpowder and had a mindset to conquer the world. And for better or worse, they did.

Their whole understanding of the world separates us from it. Separation has become part of our DNA. We feel alone, or at least I do. Most of us don’t even realize it, so there is little effort to change things. We as the song says, become, “comfortably numb.”

But are we comfortable? Or is there something deep within us telling us that things have gone awry? With the subject-object distinction built into our language and unconsciousness we can only relate to something, or someone by distinction, by seeing that which separates us from it, and it from other things. I think of watching Sesame Street with my kids and hearing, which one of these things is not like the other? And it begins. We superimpose this mindset on our Scriptures and come up with, and do things that seem so foreign to the will of a heavenly Father whose nature is love, and we do it without ever asking ourselves why we think God would condone such behavior, because we unconsciously hold that it is right.

I wonder if it is too late, if we have gone down the road too far to come back? I wonder how many will even think of asking the question? I wonder if they will ever see, the main problem is not what we think, it is what we think with. It is the way our consciousness has evolved causing us to not even question ourselves, when one look around, tells us there is something tragically wrong.

I see the young raging in the streets, they are angry, justifiably so, and yet as I listen to them, I see that they hardly know themselves at all. I see the same separation, the same self-centeredness, inflated ego and sense of self-worth that plagues the folks they are protesting against. In the end they will change little or nothing. My generation didn't.

I see a movement to try and bring Christian revival to the streets thinking that will change things, and yet they too are trapped in the same place as those they are trying  to save. They are just putting forth a different philosophy.

I ask myself will they ever see the truth, will I, does anyone really see it? Then I realize that the answer is no, at least not yet. I ask myself if our own scriptures tell us (we only see through a glass, darkly; but then face to face: now I know in part; but then shall I know even as I am known) why is it that we walk around spouting off like we know it all? Why do we find it more attractive than loving God and our neighbors These are the two commandments Jesus tells us upon which rest all of the law and prophets? Think about it for a while, really think.

This mindset of acting like we know it all has been handed down to us by our culture. With all its wonderful aspects and achievements it is the worst parts of it that separate us from creation, the Creator and each other.

So I raft, I talk to my Creator, my brother the river and learn from them both, because learning from the revelation of the Creator in the created is a way to see.

Paul tells us that the whole creation groans in anxious expectation for the revelation of the children of God. The creation cannot groan without experiencing emotion, and as J. Robinson, Greek scholar, tells us that you cannot get around this, do with it what you will, but it is there. And that is just what we do, fueled and guided by our culture of separation. We kill nature, we make it other, not living beyond the flora and fauna, insects, bacteria and the like. We separate ourselves from it so we can study it and we miss the fact that we can relate to it in a deeper sense, and in that sense, the river is truly my brother as the great Chief says.

In the end, I leave you with this, I don’t understand it totally but I experienced it.  On a particularly nasty swim when I flipped my raft at flood stage, and like a fool I was running alone, without any other rafts along, I was being carried downstream. It was in the spring, big water, cold water but I was in a dry suit and was actually sweating because of working to get out of the river. I really wasn’t worried but after close to a mile I was getting tired, I had to keep going to get by trees in the water. It was hard to get out of the current when I found openings. And, after a while I was praying I could get out and then what came out of me was this. Without thinking, I asked my brother, the river, to give me a hand because I was tired. I never would have thought of this myself, and had just been praying to God. As soon as I did I was released from the current and floated into an eddy, made shore, and began my trip back upstream to find the raft, and equipment.

Was it just by chance I was released? It sure could have been. One thing I have found out about God is we are always left with alternative explanations and we must choose to whom or what we give the glory and thanks to. Also another thing I have noticed, in all of the instances like this in my life is God, my Creator, my father, my mother (yes God is as perfectly feminine as masculine) teaching me something I needed to know, and the best I can do, is choose to listen.